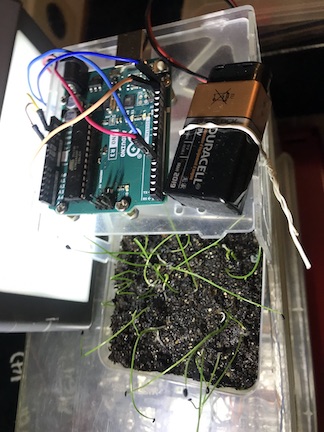 The known Universe is tens of billions of lightyears in size. Yet, ironically, space available in space for experiments is often limited to mere centimeters.

One goal of this project is to introduce students to concepts related to growing pants in space, such as inputs and outputs, constrained volume, sensing and controlling. Another goal is to eventually produce a chamber that is better optimized to actually grow plants.

Sustainspace has created version 1.0 of the chamber. This version is a baseline STEM chamber intended to demonstrate key concepts and be relatively simple to construct. It requires no soldering, but patience is helpful.

It contains colored LEDs for illuminating plants and signaling growth direction and several. It is built around a 1U (10 cm^3) translucent plastic frame. In one configuration, plants are contained open air in a pullout square petri dish tray, but could be placed in other enclosures (sealed or open air).

An Arduino controls multicolor LEDs and monitors temperature and humidity sensors. Data transmission is through a cable attached to a computer. However, the chamber LEDs can be operated by connecting a simple 9 Volt battery to the Arduino. LEDs are pulsed to provide red light to give the plants energy (via photosynthesis) and blue light to communicate desired growth direction.

This version is not intended to provide the necessities of growing plants, aside from a small proportion of required light. The 1U frame is translucent with large openings to allow air and light to enter the cube. The plants will also need to be watered. This chamber is only 10 cm tall, so plants may periodically need to be trimmed to fit inside. Our baseline test plant is chives. Periodically trimming their tops provides a nice food garnish. 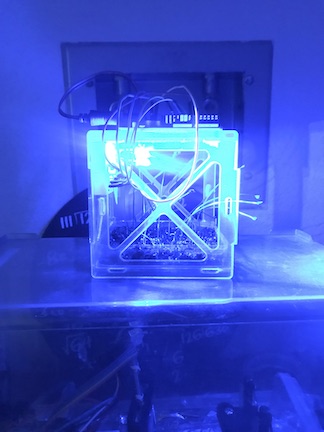